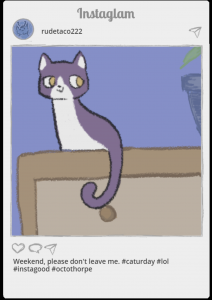 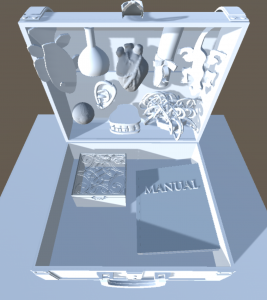 NOTE: When I say “week” in this post, I’m talking about the time between the Reflective Games Group meetings, which generally happen on Wednesday mornings.

This week, I decided to focus on getting a project that’s been lingering for a long while done, which is the digital version of the Truly Terrific Traveling Troubleshooter. Up until the previous week, my time when I worked on it (in between my synthesis essay and other commitments) was spent making 3D models. The project is fairly simple, but I am teaching myself Unity in order to make it. Unity isn’t so difficult, but it does have its quirks and of course I’m using it to make something that is quite unlike the usual beginner tutorials. It’s amazing how much of my programming knowledge from other languages and engines applies in Unity, so I’m not quite starting cold. The reason that I haven’t learned Unity up until now is because my previous laptop wouldn’t run Unity at all — some quirk of my particular processor and Windows 7 rather than a speed issue. I had run previous versions and done KO-OP Mode’s “make weird stuff in unity” tutorial, which is quite fun.

I’m hoping to finish the project this week — I already have the “main mechanic” implemented, basically, but now I’ve got to add in explanations, text, menus, an introductory screen, persona generation, etcetera. For now, all the objects are textureless — it’s a look that I’m into, but we’ll see if I stick with it. I think I will for this version.

The other project that I worked on this week was journaling as a form of data collection during the GAMERella jam, where I made a project called #nofilter with Squinky, Serena Fisher and Diana Lazzaro. You can check it out here: https://jekagames.itch.io/nofilter. As it turns out, journaling took up a fair bit of time during the jam. I wound up writing about 2000 words or so.

So, with two days spent on the digital version of The Truly Terrific Travelling Troubleshooter last week, followed by the GAMERella jam — an intense two days of making — I find myself rather tired. I think that I’ll spend the next two days on The Truly Terrific Traveling Troubleshooter and try to finish it. That way, I can focus on my dissertation proposal, getting some writing out there into the world, my Reflective Games design work, and my tabletop game design work (Radio D-20 and my new time travelling campaign) from now on. Perpetually working on so many different projects is tiring sometimes because I have to keep them all in mind. In a way, that’s what I find refreshing about jams — you make something self-contained and finished in a single weekend. I’m ready to finish something on my task list!