Really, this should be three blog posts, but maybe I’ll just fold it all into one. It’s been a while since I had the chance to write (over a month) but I haven’t been idle! There are three major things I want to write about that I feel are especially relevant to my design practice and what all I’ve been up to, and a few minor things.

First, I had a surgery that was supposed to happen in July delayed at the last minute until this Monday, the 19th of August. This is probably a good thing — it means I am missing out on certain things (like, for example, giving a talk at MUTEK and going diving on one of my favourite shipwrecks) but it also meant I was in decent shape for things like Artcade, where I most recently showed TRACES. That went really well — it was a perfect test case for an actual party, and although I couldn’t interview everyone who played afterward, I did have a notebook for people to write comments and feedback in, and I encouraged people to write if they wanted to. So, I did collect some data at the playtest both through my own observations and through what people chose to write. The feedback is incredibly encouraging and heartening, and was also consistent with some of the common threads in the previous interviews regarding where people thought the design could be improved.

I’ve also been plugging away at the design work, and I have most of the design sorted for two out of the three multi-step puzzles I intend to include in the escape suitcase. The one that I don’t have sorted is the one using conductivity and sequence puzzles. I think the other two just need to be built, basically, and I’ll eventually have to get part laser-engraved for at least one of them.

I have plans to meet with Tom’s mom to design the suitcase. She is a hobbyest woodworker and has made some very beautiful pieces. In the past, she’s helped me build a treasure chest for my nibling that we filled with costumes. Now, I have access to a gigantic woodshop at Concordia if it turns out that I need it, but in this case, I am valueing the chance to spend time with a loved one over working with big tools in a shop that, while friendly, is also still a bit alienating. Or, if not alienating, not what I want to deal with at this time. Honestly, everyone I’ve met there is very friendly, but right now, my executive functioning is such that arranging the meetings with the technicians, having to make technical drawings, and all the rest, sounds like a bad time. But, good to know that they probably have every tool that I need if I do need access to something extra.

From July 27th to August 3rd, basically, right after Artcade, I participated in my yearly creative reset button, GISH, and oh wow. I did a personal best on number of solo and team items! Our team completed 222 out of 227 items! I did things like learning how to make a deep fake, making a video game, and learning how to silk screen with serratia bacteria (which wasn’t a requirement for the item). Actually, the bacteria item was one of my personal favourites. 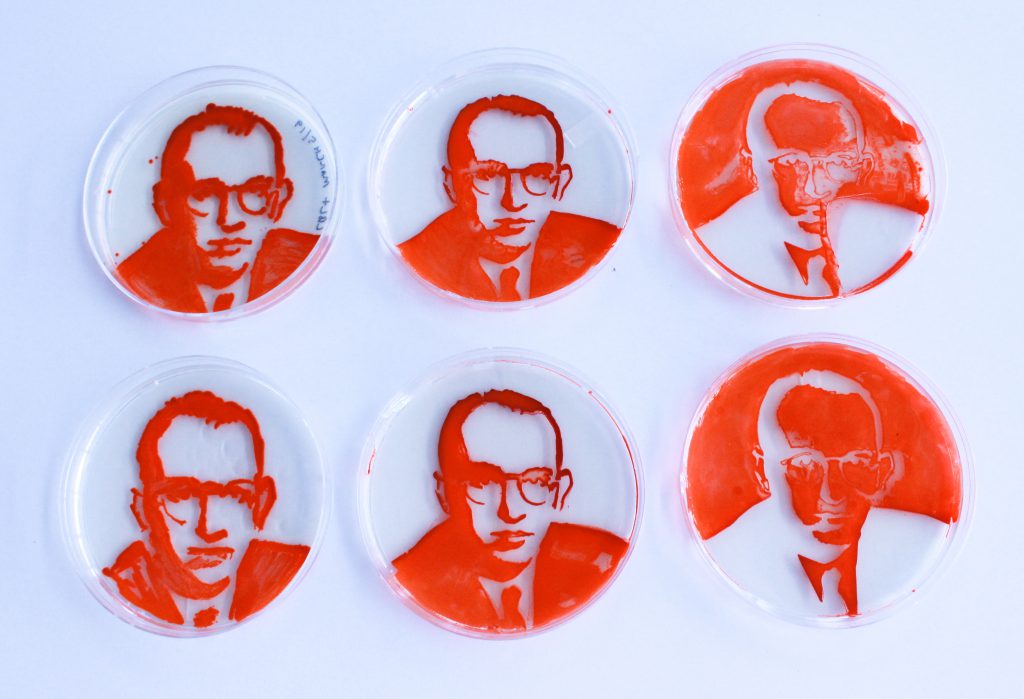 The goal was to make a bacteria portrait in a petri dish of Jonas Salk, the inventor of the polio vaccine, and to tweet it at Melinda Gates thanking her for her work helping to vaccinate children. I contacted Alex Bachmayer, from the Milieux Institute, and I found an enthusiastic collaborator. Alex taught me about lab safety in the biolab, about how to prepare agar plates for bacteria, about how to paint using serratia, both freehand and with stencils, and then how to print on fabric with them…to make Jonas Silk (a pun we both found deliciously bad). It was really lovely to get to know Alex and to hit this item out of the park.

The other item that I learned a lot from was the Deep Fake, which was supposed to be Misha Collins complimenting Trump — I tried it two ways almost simultaneously. I had a friend, Drew, do an impression of Misha Collins fo the voice, but then realized that Drew’s hair and jaw didn’t look like Misha’s, and that the deep fake would only replace the face. So I had Tom lip sync to Drew’s impression, then replaced Tom’s face. The two ways part comes in here: I tried a software running on my own computer and an online server. I had no choice in the end but to use the online server — with more time, I think I could have trained the deep fake software I was using, but it was GISH, and there were other items to do. On my computer, Tom’s face was replaced with a blurry rectangle. On the server, I trained the thing three time before I wound up with our final version.

Other than that, I played and beat an escape room with my brother and Tom while in Toronto for a top surgery consultation, and got some ideas for my game about what I’m doing right and what else I could be doing. It was a fun one that I would recommend — the puzzles weren’t super integrated into the narrative and it wasn’t that immersive, but the puzzles were fun, fair and the right level of challenge. If you’re curious, it was the Wild West room at the Mississauga location of Escape the Six.

The next day, Tom and I, who haven’t been able to take a vacation this summer for a variety of reasons, spent the day at Niagara Falls. We did the Hornblower tour, which brings you right up to the Horseshoe Falls, visited Niagara Glen, hung around in the city a bit, and then took off to St. Catharines for one of the best Italian meals I’ve ever had — top three for sure. It left me feeling recharged and inspired to do some dissertation chores I’ve been putting off, like scanning forms and that sort of thing.

QGCon is also coming along! We announced our dates yesterday – May 23rd and 24th, so I’ll be spending my wedding anniversary running a conference. We also announced that I’m this year’s lead organizer! The team is really lovely and we’re doing great things together. I’m looking forward to it.

I don’t know how the next little while will go, because I’ve been pretty good about my rule of taking evenings and weekends off — I am definitely much more productive and recovering from the burnout I’ve been experiencing, but Monday is deviated septum surgery day, so who knows when I’ll be feeling up to making a wooden suitcase or working on game design. I’m also teaching again in the fall, so while I think I’ll be fine, scheduling-wise, it’s possible that teaching-related emergencies might come up.

Here’s hoping I’ll still be on track to finish the dissertation by the spring! There’s a good chance that I won’t be, but I’ll do my very best!