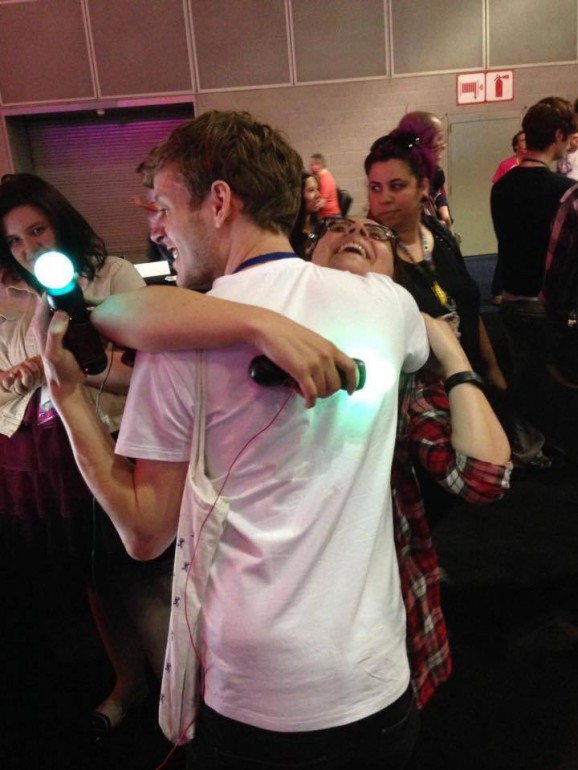 Last week was IndieCade 2015, a festival celebrating indie games in all their forms, and, thanks to TAG and many other folks, I was there with In Tune as an official Night Games selection. It has been one year and one month between the creation of the first prototype of the game and showcasing it at IndieCade as an official selection. In between, there have been many adventures.

In Tune was created at last year’s mLab-hosted satelite location of boobjam 2014, which happened at the end of September. Boobjam is a game jam that encourages creators to think about breasts in ways that they aren’t normally considered in games – as something other than objects for the straight cis-male gaze. Inspired by the theme of the jam, In Tune came about as we thought about bodies and their interactions. It is fair to say that we were also inspired by the awkwardness of bodies. Most importantly, it is concerned with the navigation of consent – firstly around those bodies and the negotiation of physical contact, and then, using that physical negotiation to extend the thinking into other areas. 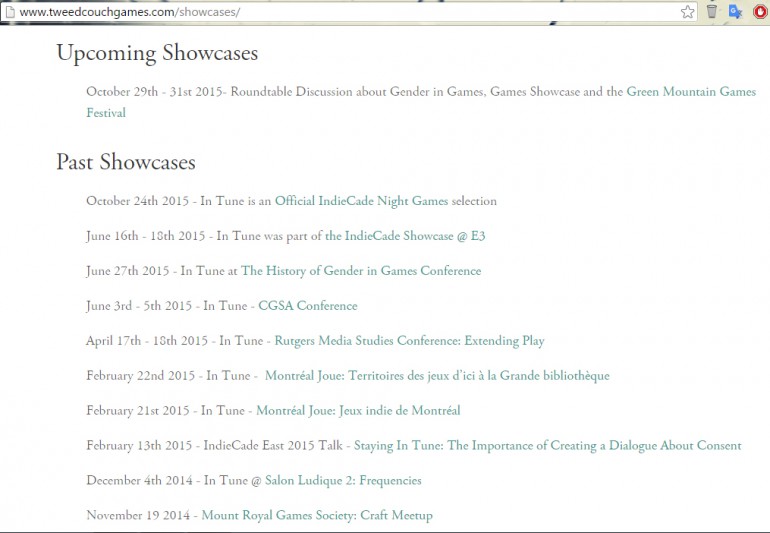 By now, In Tune has showed in many places, both locally and internationally. For each venue that we have shown it at, we have had to track down the safer space/inclusivity/anti-harassment or similar policy. We do not show the game in spaces which don’t have one, and always have a printed copy of the policy on-hand. This serves to raise awareness for the existence of such policies and makes sure that we are knowledgeable about available resources in case any concerns should arise when people play our game.

In Tune works with a Mac Computer (with an OS older than El Capitan), PlayStation Moves, a Makey-Makey, some wires, and handmade conductive sleeves that slip over the PlayStation moves. Our game has also been through many phases: first with tinfoil and PlayStation 3 Controllers, then with a variety of custom controllers (held together by solder, hot glue, and a prayer) and finally PlayStation Moves. This makes it a difficult game to judge for showcases like IndieCade. We have been lucky enough to have had judges that either heard about the game and believed in it based on the strength of the trailer and other documentation, or they got the chance to play it at other events (which the game was at because somebody either believed in it on the strengths of the trailer and surrounding documentation or got to play it at another event).

Due to changes in the way that bluetooth works on the latest releases of Mac OS (El Capitan), the API that we use to pair our PlayStation Moves to the computer no longer works, not to mention that getting PlayStation Moves to pair with PC has pretty much always been a difficult prospect (even the Copenhagen Game Collective wouldn’t touch it, in the end). So, we either have to keep a computer with an older OS (thus breaking many Apps on it) or continually be able to wipe a computer to bring it back to a version of the OS that works for us.

So, as you might be able to tell, the tech alone puts some restrictions on our ability to distribute In Tune as anything other than an installation piece, which is why it is so important for us that we get to take it around and show it. We are currently working on low-cost and low-time-cost ways to distribute the game. With the Makey-Makey Go coming out (hopefully this December), we think that we might be able to help people put together kits for under fifty or sixty dollars (used PS moves at 15USD per controller, the Makey-Makey Go for around 20USD, and then some conductive thread, wires and fabric).

However, even if it weren’t for the tech requirements of the game, this is a game with potentially sensitive content that has to be framed a certain way, and, perhaps most importantly, where the rules have to be carefully introduced. So, in considering how we share the game, we will potentially have to provide documentation and long-distance volunteer training in the future for the many people who have requested copies of the game for educational and workshop purposes. We trained a volunteer this weekend for the Green Mountain Game festival, and that went pretty well. Something to consider…

You can read some of the articles that have been written about In Tune here: http://www.tweedcouchgames.com/what-theyre-saying/

It’s been getting quite a warm reception, and we have had a dozen requests from people who would like to show the game for workshops and other educational contexts.

Taking In Tune to IndieCade was a fascinating experience, both during our actual game showcase and for me as a “young game maker and scholar.” I was surrounded by and got to discuss with people who I have been reading about (Celia Pearce, Brenda Laurel) or playing games by, and it really helped my studies come alive for me. Perhaps especially because in English Literature, my focus was on Middle English studies when it wasn’t on Creative Writing, which means that many of the writers I was engaging with have been dead for many hundreds of years. That makes being a part of a relatively young medium like games and games studies very interesting.

The /Gaming for Everyone/ pavilion was my favourite spot throughout the festival, because so many excellent games that might not fit the traditional mold of the festival, or were late entries for newly made games, were able to showcase there as well as community organizations that are responsible for helping to get new and different people making games. I was so happy to see “We Are Fine, We’ll Be Fine” (http://wearefine.ca/) there along with Nicole and Hope, and to see a few folks from Pixelles Montreal there as well, along with similar initiatives from around the continent, including Dames Making Games and Different Games.

I also got to spend time with the incomparable Dietrich Squinkifer (Squinky for short) who may be joining us again in Montreal soon and the transplanted Allison Cole (former mLab coordinator currently doing her thing at the NYU Game Center). Squinky is much more familiar with the folks from the IndieCade community and was kind enough to let me tag along as their entourage and introduced me to many cool people.

Another highlight of the festival for me was Pillowtalk: A Keynote Conversation, which featured discussions of intimacy and consent with designers who I am personally very interested in, including Naomi Clark (Consentacle — always great to see another game concerned with consent!), Nina Freeman (who just released Cibelle today), and Robert Yang (Hurt Me Plenty).

Overall, I think that I could have had a very different experience of IndieCade just depending on which events I chose to go to and which tents that I entered, but that I had the options that I did is a good thing, even as IndieCade grows larger and larger… I imagine that sustaining the event’s character with all of that growth is a challenge. I’ll be keeping an eye on how the IndieCade organizers handle it all.